If we win, we could end super PACs nationwide. Join us!

What would Hamilton think about super PACs?

As you might know, the Supreme Court has held that corporations (and unions and rich people generally) can spend unlimited amounts of money supporting or opposing a political candidate — just as long as they do it “independently” of the candidate’s campaign. That case was Citizens United.

What you might not know is that Citizens United did not create the super PAC. Instead, the super PAC was born when a lower court reasoned that if you could spend unlimited amounts to support or oppose a political candidate, you should also be able to give unlimited amounts to a committee who would support or oppose a political candidate.

That case was SpeechNow. We believe SpeechNow is just wrong.

In particular, we believe it is especially wrong for the conservatives on the Supreme Court who say they are following the will of the Framers of our Constitution. We believe we can show that super PACs create precisely the kind of corruption that the Framers were trying to end, and that any consistent “originalist” should therefore reject super PACs.

Working with citizens in Alaska — where state law gives citizens the right to demand election law be enforced — we want to take this question to the Supreme Court: What would the Framers have said about super PACs?

Because when they consider the evidence, we believe that we can convince at least a few of the conservatives on the Supreme Court that neither Hamilton or Madison or Jefferson or Washington or any of them would ever have believed their Constitution protected super PACs. 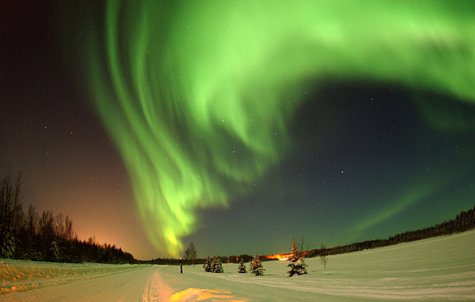 Every U.S. Supreme Court case begins somewhere, and for our legal challenge to super PACs, Alaska is that place.

Why Alaska? To start, Alaska has something few other states still do: limits on contributions to independent political groups (in other words, a law that, if enforced, renders super PACs largely unworkable). Alaskans adopted the current limits by ballot initiative in 2006. Under the law, individuals can only give a maximum of $500 towards an independent group, and other outside organizations (like unions or advocacy groups) can only donate up to $1000 to any given independent group.

These contribution limits make sense for Alaskans. With its abundant natural resources and small population, Alaska is particularly vulnerable to the corrupting influence of big money in politics.

Indeed, Alaska has a long history of corruption stemming from money in politics going back to the founding of the state. In 2006, for example, a natural resource company was caught bribing the state’s top politicians to reduce the company’s taxes. The natural resource industry also legally bankrolls the campaigns of most Alaskan national figures.

With the invention of super PACs, the situation has only gotten worse. The 2014 Alaska U.S. senate race was inundated with so much super PAC money that it became the most expensive race in Alaska history, effectively rendering the voice of most Alaskans irrelevant. And things have gotten even worse since. For the upcoming election, one super PAC supporting a candidate for governor is almost entirely financed by the candidate’s investment banker brother, who doesn’t even live in the state!

Wait—if Alaska has a law that limits contributions to super PACs, how could these outside groups still buy elections there?

For several election cycles, the state entity that is tasked with enforcing the aforementioned contribution limits—the Alaska Public Offices Commission, or “APOC”—has refused to enforce them. Why? It concluded that the limits are unconstitutional under several lower court decisions that struck down similar laws in other states.

Here’s the rub: No one has yet challenged APOC’s interpretation, one that undermines the will of Alaskans. And the Supreme Court has never weighed in on the constitutionality of these limits, either. So there is ample legal room to force the issue. Moreover, Alaska has a unique provision that allows any Alaskan citizen to ask election administrators why they are not enforcing the election laws that Alaskans voted into law.

So in Alaska, we have the law over which to sue, the process through which to bring it through the courts, and a history of big money interests distorting the will of the people. We also have three courageous, longtime Alaska residents who have agreed to join us in this project. (See “Who’s Involved”) Alaska, therefore, is the perfect place for this case to begin.

We’ve recently presented our case to APOC, and the Commission, as expected, has refused to enforce the contribution limits. But now we have a chance to appeal the ruling in court, with hopes of making our way to the Alaska Supreme Court, and, ultimately, to the U.S. Supreme Court. And if the Supreme Court agrees with us that these limits are constitutional, we can substantially curb the influence of super PACs nationwide, and we will have to thank the ever-trailblazing Alaskans for taking up this important fight with us. (See “FAQ” for more information) 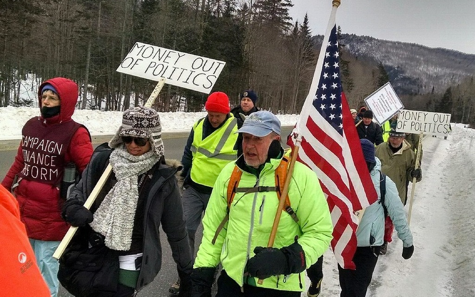 Three longtime Alaskans stand in for all citizens in Alaska who want to ask their regulators to enforce the existing contribution limits that they voted into law in order to curb corruption in their state. They believe this issue can unite Democrats, Republicans, and Independents alike, because regardless of political affiliation, we should all want to ensure that our government is responsive to the needs and preference of the people, and that it is not bogged down doing favors for large companies, unions, or outside groups.

James Barnett is an attorney who has been practicing law in Alaska since 1974. He served as an elected member of the Anchorage Municipal Assembly (1986-1993) and as Deputy Commissioner of the Alaska Department of Natural Resources (1983-1987). He was president and a member of the Board of Directors of the Cook Inlet Historical Society from 1993-2015 and was the chair of the Anchorage Centennial Advisory Commission from 2013-2015. He has also written, co-edited or contributed to several books on Captain James Cook, Captain George Vancouver and the history of Alaska, including Arctic Ambitions: Captain Cook and the Northwest Passage (Seattle: University of Washington Press, 2015) and Captain Cook’s Final Voyage: the Untold Story from the Journals of James Burney and Henry Roberts (Pullman, WA: Washington State University Press, 2017).

Pat Lambert has lived in Alaska since 1982. He is an emeritus professor at the University of Alaska Fairbanks. Amongst his interests are voting theory, electoral reform, and fairness in politics; he has taught a number of short courses on these topics in recent years.

Donna Patrick is a nurse practitioner who has lived in Alaska since 1983. Since 2001, she has worked at the University of Alaska Fairbanks Student Health and Counseling Center. As a member of the Alaska Nurse Practitioner Association, she has lobbied her Alaska representatives on behalf of patients and the profession of nursing on several occasions to ensure a better healthcare system for all. 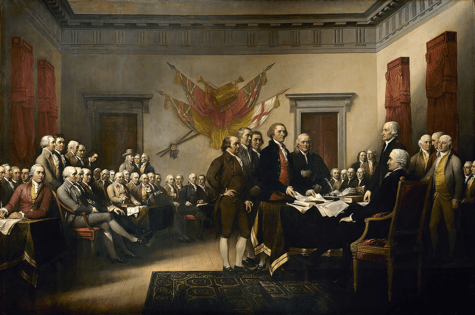 Who Are We Suing?

The formal complaint asks APOC why it has failed to enforce the contribution limits against two different entities: one that supported a Republican, and another that supported Democrats. The first entity is a right-leaning independent group called Interior Voters for John Coghill. This is an outside group that supported the election of Republican John Coghill, who is currently the state Senate majority leader. This outside group accepted over $40,000 from a group called The Accountability Project. The Accountability Project claims to hold “candidates and elected officials accountable for how they impact jobs, business and economic development in Alaska.” The Anchorage Daily News, however, described it as a “business-backed political group” that supported very conservative candidates in the last election cycle.

The second entity is a left-leaning independent group called Working Families of Alaska. This group supported a wide variety of Democratic and moderate or left-leaning candidates, and accepted over $220,000 in donations in 2016 from two union affiliated groups: Laborers Local 341, and Laborers’ Political Education League.

These entities were not named because of any misconduct or because of any particular political stance they took. Instead, as best we can tell, they both filed their required reports and took and spent money in accordance with what APOC believes is the current law in Alaska. But even though the groups come from opposite sides of the political spectrum, they are united because both groups accepted donations well above the statutory limit (which is $1,000). Thus, we are asking APOC why it did not enforce the existing laws against these two entities.

How Does This Work?

On Jan 31, 2018, on behalf of our three Alaskan complainants, we filed the complaint against APOC for their failure to enforce the voter-approved contribution limits. This was the first step of this legal case. (See the press coverage on the complaint filing)

On Feb 21, 2018, we appeared before the five-member Alaska Public Offices Commission in Anchorage, Alaska to argue our case. A lawyer representing the Commission argued that APOC should reject our complaint, because other federal courts that have already ruled that contribution limits to independent political groups are unconstitutional. But our Chief Counsel, Jason Harrow, gave a passionate rebuttal, outlining how super PACs were negatively affecting Alaskans, and urged the Commission to reconsider how the federal court decisions applied to Alaska. Unsurprisingly, the Commission voted 3-2 to reject our complaint.

While that sounds like a setback, a rejection was exactly what we wanted. This rejection allows us to appeal our case to the Alaska Superior Court, setting a clear pathway to litigating in front of the Supreme Court. Our legal team is now preparing to file the papers to appeal, and a hearing is expected in late summer or fall of 2018.

What Happens If We Win?

It is not an understatement to say that, if we win at the U.S. Supreme Court, we change everything—or, almost everything. If the government may enforce limits on donations to independent groups, then the ability of corporations, unions, and very wealthy individuals to spend money directly supporting or opposing political candidates is greatly diminished. That, in turn, will finally reduce the dangerous dependence that currently exists between politicians and their backers. Cutting this unhealthy link will make government more responsive to everyday citizens.

Who Filed This Lawsuit?

This legal case is a project of Equal Citizens, and is led by our founder, Professor Lawrence Lessig at Harvard Law School. It is managed day-to-day by Equal Citizens’ Chief Counsel Jason Harrow, with the assistance of attorneys Scott Broadwell and Liz Hodes in the Anchorage office of law firm Davis Wright Tremaine LLP.

How Does This Case Connect with Equal Citizens’ Mission?

Equal Citizens is dedicated to reforms that will achieve citizen equality. Getting big money out of politics is one important component of that, but there are others that Equal Citizens is working on too. For instance, Equal Citizens is also about to launch a series of coordinated lawsuits to challenge the winner-take-all allocation of electors in the Electoral College. If Equal Citizens succeeds in this legal challenge, which is called “Equal Votes,” we will eliminate the inequality in the way we elect our president that exists purely because of where people live and whether they live in a swing state or not.

Learn More About the Case

Media Coverage on the Case →

Legal Documents from the Case →

GET UPDATES ON THIS CASE